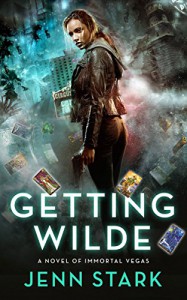 This book received from NetGalley in exchange for an honest review.

Urban fantasy is a genre that's starting to become like romance in a way - there are certain tropes and expectations that readers have started to develop. The main character (usually but not always a woman) with some form of power and a dark secret in their past works as a detective or merc in a supernatural society. There's also usually at least one, usually more, excessively hot love interest. It's comfort reading, a pure vein of escapism. You know what you want coming in, and the best ones feed that need with enough of a twist to let their heroine stick in your memory.

And this is one of the good ones.

From the moment Sara has a no-nonsense conversation with her first client of the book, I knew I liked her. She's tough and angry and capable, a woman who actually feels ground down by life but still seeded with an inner fire that won't let her give up and won't let her allow people to walk all over her. She's doing good work, doing it her own way, and is focused on a tough but somewhat hopeful future for those she's working to protect.

In this book, those come in the form of immensely strong (both magically and monetarily/politically it seems) people whose code names are based on major arcana cards for the Tarot. (There's also a set of families corresponding to the suits and another set of families as well, I think - if there's one rough point early on it's that a lot of information gets thrown at you really fast and it's not easily clear how it all connects. I'm pretty sure some of it will come into play in later books, but a lot of it went in and out of my head).

So anyway, Sara is forced to go to a city she doesn't want to visit and face parts of herself and her past she doesn't want to remember in order to do something she DOES want very much to do - save young people with psychic powers, young people who are being kidnapped and/or killed in horrifying numbers as awareness of the reality of psychic powers becomes more and more accepted. And while this concern for children is another thread that seems to run through urban fantasy, it's rarely more visceral than it is in this book. I also liked that.

The action is quick-paced and engaging, the voice of the prose is just perfect and the characters are all well-rounded and fascinating, with complex stories and motivations. It's just a well-written story all around, a quick read that felt like it was over too soon (not because the story felt incomplete, as sometimes happens, but just because I wanted MORE).

There was one other thing that did bother me about this book, and I wonder if this might be one of those romance-book things that I just don't get. And here there be spoilers, so proceed with caution, but it has to do with how one of the main male characters treats our heroine. Spoilers! You are warned!

So, the guy who sends Sara on the main mission in this book and brings her to Vegas is The Magician, a guy with some seriously powerful mojo. And early on in the book, he notices she has a necklace that will prevent people from having sex with her and decides to see how far he CAN go.

I think I'm supposed to read the scene as she's giving permission even while she's protesting. Like I said, maybe this is some sort of romance-y ravishment thing I'm just not used to? But... eh. It reads like he thinks because her body's responding, she has no right to decide with any other part of herself and he gets to do whatever he wants. And that felt so uncomfortable that it not only poisoned the scene, it poisoned the character. I don't like him. I hope they never end up together. I mean, Jesus, who sees an anti-having-sex charm as some sort of invitation? It's pretty much the opposite of an invitation. I'm going to hope this was intentional and we're meant to dislike him.

Also, this kinda happens again with another character, but at least he makes it clear that he knows he's flaunting her boundaries and doesn't care. It also never feels like they're setting him up as a love interest.

So that knocked it down a bit for me, but overall, I liked this and I will most assuredly be checking out the next book. I love the grit and glitz and grunge and glory of setting it in Vegas, and the setup of her world has a lot to explore. If you like urban fantasy, I think you'll find a lot to enjoy here.