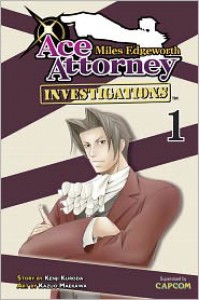 This really does feel a LOT like the Phoenix Wright series, and like that one I believe this is five books long. It has the same feel as the game, the mix of the serious and the absurd that, for me at least, helped make the Ace Attorney games fascinating.

It's not a perfect copy of the Phoenix Wright manga, to be sure. For one thing, Edgeworth attracts the ladies and is assisted by a (somewhat incompetent) detective, rather than attracting the weirdos and being assisted by underage girls.

Also, it's something of the difference between Jessica Fletcher and Sherlock Holmes. Wright always feels like he's working things out as he goes along, and through dedication and persistence and luck, eventually puts the pieces together. But with Edgeworth, he always feels like he has a pretty good idea of what's going on even when he doesn't have all the facts yet. I think it's a matter of composure. It's an attitude that carried through his Investigations game and continues here.

This volume includes two stories. First, a woman is found murdered in a bathroom, and the suspects were all at a tea tasting party or a masquerade party. Then, the lead singer of a band is killed on the night of their last performance as a group and all of the bandmates are the suspects.

(Also, can I just say how hilarious imagining Edgeworth and Gumshoe hanging out at a rock concert is? Especially with Edgeworth standing there like he's too cool for any of it and Gumshoe being all like IDGAF).