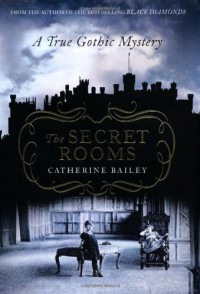 Nonfiction generally isn't my thing. I read it occasionally when interest warrants, but mostly, I stick to my sci-fi and fantasy. But when this book crossed my path first, years ago, I had to put it on a TBR pile to consider for later. And last month, when I realized my library had it, it was finally time to give it a try.

This is the story of the Duke of Rutland, who died in an entirely preventable way, cloistered in a few, damp rooms in the back of the servants quarters of his home instead of in the well-appointed rooms set aside for his use as one of the elite of the nation. The author of this book set out to write a war book but ended up discovering a mystery left behind in those rooms, and her focus quite rightly moved.

The fact that the research initially started for a war book may be part of the reason I didn't like this book more. It's almost two different books sort of shoved together - the first a tight, nicely paced exploration of her slow unearthing of the mystery behind the Duke's last deadly days and the project that consumed him, and the second, an extensively documented war story with endless letters and repetition.

Slimming that latter part a bit would have made for a much more interesting and better-paced story. Things got over-explained, we got letter after letter that didn't always add much. While it's nice to see this stuff in their own words, maybe include the most important and summarize others, maybe with a footnote pointing you to the full letter in the back of the book? It REALLY made things drag.

But that doesn't change the fact that overall, this was a fascinating and sometimes disturbing tale of a family that was irrevocably broken from some of its youngest days and from which, the youngest son pretty much never had a chance at regular happiness.

If you're interested in this real-life mystery, it's a solid book, and I think there was a lot more to this book than the last such one I read, "Empty Mansions." It wasn't a waste of time to read, I'll say that - and at times, it was downright compelling.