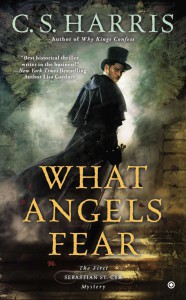 By all accounts, I should have enjoyed this - a period piece, heavy on the place-as-person sort of living setting, the British gent solving crime with a plucky lad as a sidekick. A healthy dollop of the Theater's influence. A decent amount of gore. A lot of the things I like in a book were in this story.

And yet, it bored me. It's really hard for me to admit this, but I was bored by this story. I never much cared for Sebastian St. Cyr, I did not have any real feelings on the relationship he once had with another character, nor was I able to keep track of the myriad characters without a chart, which I did not feel up to keeping. Everything in the plot related back one way or another to sex, and quite often described it as a vile, disturbing or at least unhealthy thing, a system of user and usee. Maybe it was supposed to be the opinions of the time creeping in, but man, it got *old* and fast.

The mystery... eh. It didn't feel like much of a mystery. Thinking back after getting to the end, I'm not even sure how possible putting the pieces together would even be.

And then there's the action, which was okay at first, but by the end started to get repetitive - arrive at a place in a disguise, accuse the person of something, perhaps physically assault them, flee, on to the next target.

There are some redeeming points to the story - the main character is a bit different from usual, and refreshingly unlikely to fall into deep personal introspection. The action is fast paced, and the climax is pretty taut and solid. But overall, this book just didn't do it for me.