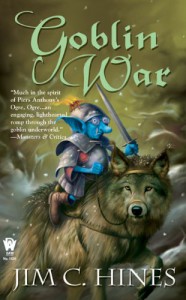 As we return to the world of Jig the Goblin, his lair full of backstabbing fellows and the Shadowstar, we find the mountain - and thus the lair - under siege by humans. War is brewing outside the goblin lands and they can no longer just hide away from the rest of the world.

And unfortunately, the rest of the world wants their blood. :(

I think this may be my least favorite of the Goblin books. This is not to say its not a good book - it totally is an enjoyable book, and every time I read it I have a lot of fun - but its less of a sendup of fantasy tropes, the way the first two were, and more of a straight fantasy novel. This is a logical place for Jig to get to, after two books of growing into a leadership role, bhut it was just less to my taste.

New to this novel are a few people, not the least of which are members of the other army - oh, did I mention there's an army of monsters in addition to the army of humans? The army of humans was actually put together in reaction to the army of monsters actually. The creatures are under the leadership of Billa, an Orc with a secret and a lot of power. But some of those working for her are just truly entertaining.

Also a welcome addition in this one? Learning more about the gods of this world and their history. Most if not all the chapters are begun with a flashback to the main god of the books looking back on the road that led him to meeting Jig. I found these glimpses into the pre-Jig world really fascinating and the Shadowstar is, as always, a very entertaining voice.

Overall, a good ending and a solid book, but lacking in some of what really drew me to the first two books, especially the first which remains utterly fantastic.