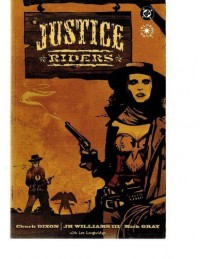 So... I like superheroes. and I love the Western aesthetic, even if I'm not the biggest fan of traditional westerns as far as reading (movies are another matter!). So when I heard this was a thing, I started hunting.

And then I heard that Booster Gold and Blue Beetle were in there and I was just sold. Absolutely sold. Any pre-new-52 appearance of these two is a green flag for me.

And I'm super glad I did. In addition to combining a lot of things I love in isolation, it comes together to make a pretty solid tale of people living outside the law and others trying to bring them to justice. It features mad science, gunslingers of various types and enough nods to continuity that I recognize the characters even without names while not being too beholden to the regular comics.

The story follows Diana Prince, the sheriff of a small town called Paradise. We start with her deputy, Oberon (JLI fans will know him) watching a prisoner by the name of Felix Faust.

As expected, he doesn't just reside peacefully in jail until his court date. Things get horrible in a hurry, and by the time Diana gets back from catching a couple horse thieves, the town's been leveled. So she sets out on the trail of the people who did it before they can wreak more havoc.

This is one of my favorite elseworlds titles, and I will admit that Booster's part as a dashing if somewhat underpowered gunslinger and gentleman (he compensates for the former :) ) is a huge part of it. But I love Diana leading her posse, and I love Wally West as the literal fastest gun in the West and Ted Kord as an eccentric scientist.

It's a short, solid, fun read and I suggest anyone who likes the old JLI stories give it a look.